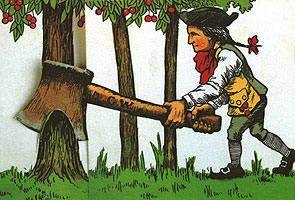 Step 1: cherries. Step 2: throw off the yoke of a tyrannical monarch.

The cherry is a cousin to the nectarine and plum, and while it has about 1,000 different varieties, less than 10 are commercially produced. While most home cooks are used to canned cherries, there is really no substitute for fresh cherries when preparing a meal.  Today, we’ll show a few items to get rid of the pit, and tasty recipes to follow after.

The popularity of fresh cherries has grown by leaps and bounds in recent years,  likely in part to emphasis on local, fresher foods. However, it can safely be assumed that George Washington wasn’t the first person angling for this delicious fruit.

Cherries can be traced back as far as  600 B.C. in China, where they were a delicacy reserved for high society. Their American origins can be traced beyond the Washington-tree-chopping-fable, to when Henry VIII brought them to England from Flanders. No, not Ned Flanders; Flanders, France to be exact.  Cherries followed the English colonists to our shores in the 1600’s.

History aside, cherries have evolved into an incredibly versatile component to most any dish. Whole battles have even been waged on their most unique usage.   Of course, most require removal of that stubborn pit (hence the ‘stone fruit’ reference). Cherry pitters are one of the more unique and varied products in our inventory.

Take the Push Button Cherry Pitter, for example. It screws right on top of a standard Mason jar.  Others, like the OXO Good Grips version, are hand-held and offer a more grippy control.  Even larger versions exist, for those among us who are doomed to bake cherry pies on-demand for school fundraisers or bake sales. For them, we recommend the Westmark 15 Kg. Cherry Stoner, which can stone 15 kg. of cherries per hour.

We found a few neat recipes, too, some of which utilize oft-forgotten relatives of the usual tart or sweet cherries, like…

Annabelle at the SuperCoolFoodBlog shows a great way to feature the husk cherry, which she described as having an “intoxicating flavor…with strong overtones of pineapple.” What better way to represent that flavor than updating the traditional pineapple upside-down cake? Here’s her recipe:

(adapted from the Fanny Farmer Cookbook)
Makes one 9 inch cake

Preheat your oven to 400°F. Sift together the flour, baking powder, salt, and granulated sugar in a medium bowl, and set aside. Remove the husk cherries from their husks by squeezing at the stem end. Rinse the cherries and discard any that have split or are discolored.

Melt 4 tablespoons butter in a small saucepan over low heat, and add the turbinado sugar. Remove from the heat and add the rum. Return the pan to the stove and cook on low for 3-4 minutes. The sugar may not completely dissolve. Remove from the heat and pour the sugar mixture into the bottom of an ungreased 9-inch cake pan. Add the husk cherries and arrange them in a single layer in the bottom of the pan. Set the pan aside.

Over low heat, melt the remaining 8 tablespoons butter. In a small bowl, beat the egg with the milk, and slowly add in the melted butter, whisking to combine. Add the milk mixture to the flour mixture and stir until incorporated.

Pour the batter into the cake pan and smooth to the edges with a spatula. Bake the cake for 35 minutes or until a toothpick comes out clean. Let the cake rest ten minutes, then invert it carefully onto a large plate and let it cool an additional 20 minutes. Serve the cake with lightly whipped cream. 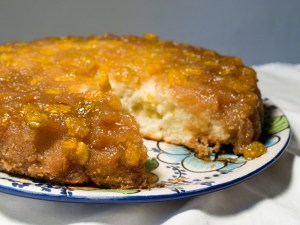 There are other summery alternatives, which bring the heat instead of sweet. We also like this Firecracker Cherry Salsa recipe from the National Cherry Growers, which makes a smashing accompaniment to a grilled pork loin. While it calls for dried cherries and preserves, it does call for plenty of chopped vegetables. When salsas call for chopped items, it’s important to keep them as uniform as possible. Using a manual tool like the Alligator Chopper makes chopping a breeze. Or, you can give them a zip in your food processor.

adapted from the National Cherry Board

Cherry influence reaches beyond the kitchen, too. The National Cherry Festival is coming up in Michigan.  It is a week-long festival celebrating all things cherry and featuring musical performances from bands like Kansas. Kansas! Sorry, we’re fans. Or, if you’re local to Fante’s, go out and cheer for Philly’s own Temple Owls, who’s school colors are, you guessed it, cherry and white.