We published a quick gift guide last week that got us thinking: the real fun behind the holiday season is spending time with your family (go ahead, admit it!), and nothing is better for sharing than a good meal. Rather than gifts, we looked into 12 foods that represent the season like no other. While this list isn’t definitive, it certainly is delicious!

For the sake of brevity (and to halt pant sizes from skyrocketing upward) we decided to split the list into six this week, and another six for our next post. We think you’ll agree that moderation is key! 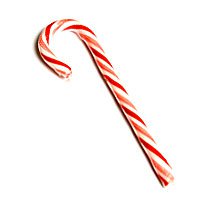 These sweet candy treats began as incredibly labor-intensive products; while it’s unclear when exactly the cane originated, their production widened across Europe in the mid-17th century, albeit as simple white canes. The famous red and white streaked design, now so evocative of the holiday season, wasn’t popularized until much later.

Making candy canes at home can be tough, what with the stretching, pulling and twisting involved – see this this detailed recipe if you don’t believe us – but true candy die-hards know that the real key with candy making is accurate temperature. Thus, a candy thermometer is essential… along with a serious sweet tooth!

A traditional German Christmas biscuit that is both a work of art and a delicious treat, springerle can be made with either a rolling pin or a board. The process isn’t difficult – the only trick is setting aside enough time to make them.

After preparing the dough, you can make the imprint using a board or a pin like the one shown here. In order to preserve the design, however, you’ll need to wait overnight for the dough to set. And in order to get the best flavor, we recommend that you preserve the cookies in a jar for two weeks before eating as well. But trust us – it’s worth it. Here’s the full recipe for springerle. Check out the pins and boards on that page too – they’re works of art by themselves!

The best part of any cold day, whether you’re drinking the kid’s version or the adult’s. The most important part of hot apple cider is, of course, the apple cider. It takes some work to make, but the homemade version is beyond compare. The only things you absolutely need are a good knife, a food processor, a container of some sort and some cheesecloth to fit over it, but an apple corer will make your work far easier. We found this guide very helpful for the process. As for the hot version, cloves, oranges and cinnamon are common additions, but there’s a lot of room for experimentation! You can use Emeril Lagasse’s recipe as a jumping off point.

For better or worse – usually for worse – the fruit cake has been synonymous with the holiday season, for at least as long as we could remember. Even the late great Johnny Carson got into it, joking that fruit cake is “the worst gift in the world. In fact, there’s only one fruit cake in the entire world, and people keep sending it to each other.” With original versions traced to the influx of cheap sugar to the colonies in the 16th century, fruit cake can often be passed off as its more popular holiday cousin, the stollen,which also features a specialty cake mold.

For us, any meal involving pork is sure to get our mouth watering. Actually, it’s not just us – the national infatuation with the holiday ham has gotten a little… weird. There’s a store devoted (mostly) to the loving roast and, not to be outdone, the Jones Soda company sells – we are not making this up – a Christmas Ham-flavored soda. No, we haven’t tasted it, but we can all agree that that wonderful honey baked taste can only be improved with a bit of carbonation.

For the food snobs among us who simply insist on having their Christmas dinner in solid form, the best way to make your ham is certainly as an in-oven roast. But before taking the 400 degree plunge, it’s good policy to pick the right pig. Check out the Reluctant Gourmet for a good primer on the right cut, type and prep, with a little history thrown in, too. Naturally, we carry a wide array of the requisite ham tools.

It’s become an American tradition in recent years; as the falling leaves turn to falling snowflakes, the preponderance of pumpkin-flavored foods gives way to a fresh onslaught of gingerbread themes. Minor gripes aside, though, it’s hard not to succumb to the spirit of the season when taking a sip – or even better, a bite – of a spicy gingerbread treat. But the original tradition is still the best: homemade gingerbread houses! Try replicating that incredible smell in your morning non-fat, no-whip latte. You can literally bake and construct your house (miniature house – let’s not get crazy here) from scratch, or buy pre-made walls and go from there.

Speaking of tradition, there’s more than meets the eye to the hard-and-fast history of gingerbread. In fact, some centuries-old European recipes  called for softer, steamier gingerbread cakes, rather than the stiffer kinds we know. Of course, those soft cakes are completely impractical for home-building, which if you think about it is the primary purpose of any cookie…

That’s six dishes down and six more to go. Stay tuned for our next edition, and have a great holiday season!